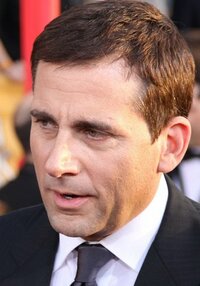 Raised by Wolfs, Frank or Francis
show all movies

Two important roles helped Carell get the attention of audiences: Bruce Almighty, in which Carell plays Evan Baxter (an arrogant rival to Jim Carrey’s character), and Anchorman: The Legend of Ron Burgundy, in which Carell plays another news personality, slow-witted weatherman Brick Tamland. Years later he would reprise the role of Evan Baxter in Evan Almighty, a film in which his character from Bruce Almighty has an experience similar to the biblical story of Noah’s Ark.

Carell’s first starring role was in the 2005 film The 40-Year-Old Virgin, which he developed and co-wrote. The film made $109 million in domestic box office and established Carell as a leading man. It also earned Carell an MTV Movie Award for Best Comedic Performance and a WGA Award nomination, along with co-writer Judd Apatow, for Best Original Screenplay.

Carell acted as “Uncle Arthur”, imitating the camp mannerisms of Paul Lynde’s original character for the 2005 remake of Bewitched with Nicole Kidman and Will Ferrell. He also voiced a starring role for the 2006 computer-animated film Over the Hedge as Hammy the Squirrel. He also voiced for the 2008 animated film Horton Hears a Who! as the mayor of Whoville, Ned McDodd. He starred in Little Miss Sunshine during 2006, as Uncle Frank. His work in the films Anchorman: The Legend of Ron Burgundy, The 40-Year-Old Virgin, and Bewitched established Carell as a member of Hollywood’s so-called “Frat Pack” group. (This set of actors includes Ben Stiller, Owen Wilson, Jack Black, Will Ferrell, Vince Vaughn and Luke Wilson).

Carell acted as the title character of Evan Almighty, a sequel to Bruce Almighty, reprising his role as Evan Baxter, now a U.S. Congressman. Although, ostensibly, God tasks Baxter with building an ark, Baxter also learns that life can generate positive returns with people offering Acts of Random Kindness. During October 2006, Carell began acting for the film Dan in Real Life, co-starring Dane Cook and Juliette Binoche. Filming ended December 22, 2006, and the film was released on October 26, 2007.

Carell played Maxwell Smart for a movie remake of Get Smart, which began filming February 3, 2007 and was filmed in Los Angeles, Washington DC, and Moscow, Russia. The movie was successful, grossing over $200 million worldwide. During 2007, Carell was invited to join the Academy of Motion Picture Arts and Sciences.

Carell filmed a movie during late 2008 opposite Tina Fey, entitled Date Night. It was released on April 9, 2010 in the US. He voiced Gru who is the main character in the Universal CGI movie Despicable Me which was very successful and will likely be reprising the role for the upcoming sequel. He has several other projects in the works, including a remake of the 1967 Peter Sellers film The Bobo. He is currently doing voiceover work in commercials for Wrigley’s Extra gum.

Carell has launched a television division of his Carousel Prods., which has contracted a three-year overall deal with Universal Media Studios, the studio behind his NBC comedy series. Thom Hinkle and Campbell Smith of North South Prods., former producers on Carell’s alma mater, Comedy Central’s The Daily Show, have been hired to manage Carousel’s TV operations.